Please email privaterefugeesponsorship@gmail.com if you are interested in participating or for more information.

® Funded by the Social Sciences and Humanities Research Council of Canada

This study aims to understand the experiences of private sponsors and the newcomers who have been sponsored to come to Canada.  The Canadian Government facilitates three kinds of refugee resettlement: government-assisted refugees (GARs); privately-sponsored refugees (PSRs); and a relatively new category of blended visa office-referred refugees (BVORs) supported equally by government and private sponsors. GARs are by far the most ‘studied’ category of refugees. Much less is known about PSRs, in part because of their smaller-scale support by faith-based organizations and civil society groups that are geographically dispersed across the country. Historically, they have been much less visible. Very little is known about the settlement of BVOR refugees because numbers to date have been small and the category is relatively new.

The overall aim of this four-year research project is to explore what makes private refugee sponsorship in Canada sustainable over a period of years. Rather than studying the current mobilization of Canadian civil society and the rise in private sponsorships of Syrian refugees, which is an important piece of research in itself, this project seeks to understand the social, cultural, and economic and political relations that support sponsors and communities over many years. In short, what makes sponsors keep sponsoring year after year?

Aims & Questions
We want to analyze how, if at all, the attributes of place and people are important to private sponsorship. What role does the size of the community in which one is settled play? From the perspective of those sponsored, what was it like to be sponsored into a small town or city versus a big one? What influence does the presence of family members or co-nationals in a community have, if they are present? Is the ‘echo effect’ –people’s desire to sponsor family members still abroad and at risk to come to Canada – a rationale that sponsors or those sponsored assign to long-term sponsorship? We seek to test this ‘hypothesis’.

The project team, led by Dr. Jennifer Hyndman (York University) and Dr. Kathy Sherrell (ISSBC & York U), is carrying out interviews and focus groups in a wide number of communities in Ontario, British Columbia, Alberta and Quebec. The study focuses on what might be called ‘serial sponsors’, those who have sponsored several times and for many years, as part of a group of five, community sponsorship, or constituent group affiliated with a Sponsorship Agreement Holder (SAH). 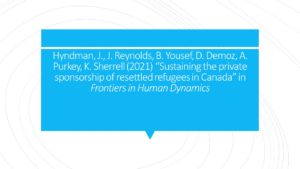 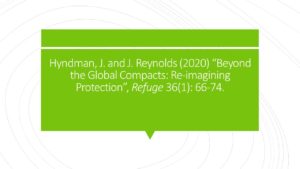 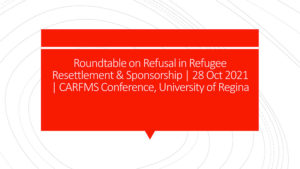